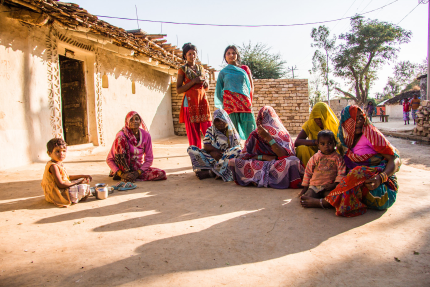 The empowerment of Indian women begins with information and training

Women in remote villages in India are very pragmatic and concerned with the issues in their villages. They have ideas and solutions but are rarely heard. We support groups of women who assemble to defend their rights.

One of our major objective is to develop the autonomy of women through income-generating activities. We started in 2013 with the very isolated village of Kitahaï. We taught women in the village to make guava and amla jam. Very quickly, the opportunity to develop new skills and earn an income delighted them. Soon, they made the jams themselves, carefully incorporating spices. In the following years we have diversified the income generating activities  by investing in sewing machines, flour making machines and spice making machines for women.

Support, training and workshops for the empowerment of women

We help create women self help groups and support existing groups through trainings and workshops in : 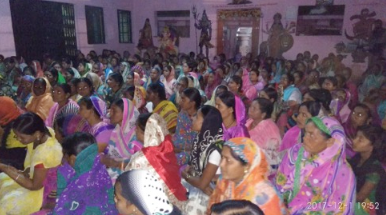 Women Gram Sabahs are organized with the purpose of involving women in the political life of the villages. A Gram Sabah is a monthly village meeting during which major decisions are made with all the participants and the village management committee, including the president. The annual budget is discussed and voted . Traditionally, women rarely go to these meetings. If they do, pressured by their husbands and other men, they dare not share their ideas. As a result, we started Women Gram Sabahs. The village president and secretary are invited to hear the concerns of the women and to note the decisions made during the meeting. These are then communicated during the general Gram Sabah.

In the village of Bhautana, following a request by the women, the gram panchayat added the investment in a new water tank. The capacity of the existing one was insufficient for the needs of the village.

In Rajewadi, the women obtained the construction of toilets as the village priority. Once accomplished, they tackled the problem of accessible drinking water. Motivated by the water supply project introduced by Rain Drop , they regularly present this issue to the Gram Sabah agenda. In turn, it encouraged the committee in charge of water issues to get involved in our project. According to Shila Gadkar, from the village of Rajewadi, the Women Gram Sabah motivate women to leave their homes and take part in the public debate.

These meetings encourage women to question the members of the general Gram Sabah and to share and discuss their problems. They feel they are heard, taken seriously and able  to communicate their claims to the Gram Panchayat. Despite these successes, the Women Gram Sabahs need to be better recognized: by the husbands, who sometimes won’t allow their wives to participate, and by the president and the secretary of the Gram Sabahs, who won’t take part in  the majority of the meetings that we have organized.

We will continue our work on this sensitive topic.

Discover all of our actions in India here